Despite his small frame, this new generation "brat" pounds some wicked beats into the drums. But don't let him hear you call him cute! Watch him in action as a guest in "Unhappy Refrain".

The Module's attire consists of a red and black shirt with erratic patterns, a heart design in the center and back, and grey camo sleeves with three logo prints. There is also a black choker with a chain that extends down the left arm to the black wristband, black tattoos on the right arm, black pants that extend down a little past the knees held with a black belt with matching straps, red and black, striped socks, and black boots.

Additionally, Len wears a red gas mask, and grey headphones with small, red handles that complement the large, black handle that go around the back of his head. Lastly, Len's hair becomes a paler yellow, his eyes become vermillion, and his fringes become more messier. 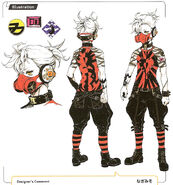 Retrieved from "https://project-diva.fandom.com/wiki/Bad_Boy?oldid=15154"
Community content is available under CC-BY-SA unless otherwise noted.