If Kaito were a doctor, he'd look good in this white lab coat. The glasses are a nice match!

The Module's attire consists of a white lab coat with the sleeves rolled up to the upper arms, a yellow "DIVA" tag on the neck, and a blue rim on the bottom of the coat. There is also a blue vest with matching pants held up by a brown belt, a light blue collared shirt underneath, a yellow tie with dark yellow diamond patterns, and brown shoes. Additionally, KAITO wears blue underrimmed glasses. 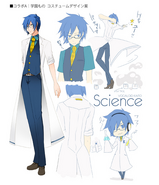 Retrieved from "https://project-diva.fandom.com/wiki/Genius?oldid=16302"
Community content is available under CC-BY-SA unless otherwise noted.