Hatsune Miku (ミク, Hatsune Miku?) is the titular character of Hatsune Miku: Project DIVA who has starred in every game in the series. She is based off the avatar of the voicebank of the same name produced by Crypton Future Media and originally released for VOCALOID 2, a singing synthesizer software.

When wearing her default attire, she has turquoise pigtails and wears a silver tank top, a turquoise tie to match her hair, a black skirt with turquoise edges and small yellow parameters, thigh high black socks, and black loafers, resembling a futuristic school uniform.

Her attire is based on her box art appearance on the Hatsune Miku VOCALOID 2 software packaging and is said to be based off of YAMAHA's DX-100 and DX-7 keyboards.

Hatsune Miku is the humanoid persona of a singing synthesizer software developed by Crypton Future Media. She uses Yahama Corporation's VOCALOID 2, VOCALOID 3 and VOCALOID 4 singing synthesizing technologies. Her voice was provided by voice actress Saki Fujita. The name "Hatsune Miku" roughly translates into "The First Sound from the Future", representing her position as the first of Crypton's "Character Vocals" and also received the codename "CV01".

She was released on 31 August 2007 and since then, she became an instant success which owed to Vocaloid becoming a cultural hit in Japan.

As of 31 August 2019, Crypton Future Media will be moving Miku and their other characters over to their own synthesizer program, Piapro Studio. 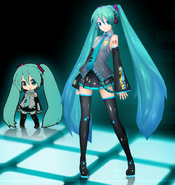 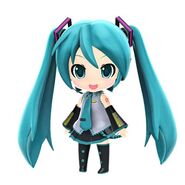