It is the first stand-alone game to be released for both consoles (not counting the Dreamy Theater titles on the PS3). The Asian versions of the Vita version of Project DIVA ƒ are compatible with the PlayStation Vita TV console but it is necessary to use the DualShock 4 controller due to mandatory touch controls in the rhythm gameplay not supported by the DualShock 3 controller. In addition, the player cannot use the AR Mode features.[1]

The game retains the same basic gameplay mechanics from the series albeit with several new changes, most notably the addition of the "Star" symbol to the game's existing symbols of cross, circle, square, triangle and arrows. The "Star" symbol represents the "Scratch" move where instead of pressing the face buttons as usual, players rub the screen (Vita version) or flick the left and right sticks (PS3 version).[2][3]

"Chance Time" has been modified from previous installments, with each successful beat filling a star shaped gauge on the bottom left of the screen. When filled, it triggers a final Star symbol that, if successfully scored, will change the outcome of the song's PV scene. Another new mechanic is the "Technical Zone"; when it occurs during a song, players must maintain an uninterrupted combo within a particular section of a song for additional score and grade points.

The game features graphical improvements over its predecessors in light of the PlayStation Vita's higher processing power compared to the PlayStation Portable. The models in the game are also based on the PlayStation Portable predecessors rather than the Dreamy Theater models, which have a slightly different art style. There are also improvements in the animations of the characters, such as smoother movements for Miku's hair and Rin's ribbons; the game also features improved facial expressions and lighting with real-time lighting computation being added into the game.[2]

Development for the game first began in 2011 before the previous entry in the series, Hatsune Miku: Project DIVA Extend. The game is jointly developed by the development teams behind the PlayStation Portable entries in the series as well as the team behind Hatsune Miku: Project DIVA Arcade.[2] A new entry in the Project DIVA series was first teased by Sega on Christmas Day 2011, when Sega released a teaser video on YouTube with footage of Hatsune Miku singing two different songs and the words "Coming 2012" at the end of the trailer.[5] On April 9, 2012 Sega posted a teaser site online announcing that they would be revealing the next entry in the Project DIVA series on April 12, 2012.[6]

The game was then officially revealed on April 12, 2012 as a multi-platform game for both the PlayStation Vita and PlayStation 3, marking the series' official debut on both platforms (Dreamy Theater software previously released for the PS3 were not actual full games for the console). A recent "store-front trailer" shows off a new feature – officially called "Photo Studio". Development was focused on the PlayStation Vita first before being shifted over to the PlayStation 3 at the later part of its development cycle and hence the Vita version was released earlier in 2012 with the PS3 version releasing in 2013.[2] The release date for the Vita version of the game, was later announced as August 20, 2012 in an issue of the Japanese gaming magazine, Dengeki PlayStation.[7]

The game was also present at a booth at the Electronic Entertainment Expo 2012, where a partially translated version of the game was playable. The game featured two songs, both in Japanese as well as Japanese lyrics but with English menu items. The demo was placed there in order to gauge interest for the game for a potential localization and the response was said to be good, although there were no official plans to localize the game at the time.[8][9] On March 7, 2013, the day of the PS3 version's Japanese release, Sega posted an image of Miku on their English Facebook page, asking fans to like and share the image if they would like to see the PS3 version of the game released in Western territories.[10] On June 6, 2013, Sega confirmed the game would be released in Western territories in August 2013. A retail release in North America was announced, as well as a digital release on the PlayStation Network in North America and Europe.[11] In November 2013, Project Diva f for PlayStation Vita was announced for America and Europe for early 2014.

There are a total of 44 songs available in Hatsune Miku: Project DIVA F. Thirty-three of the songs are obtained normally by playing through the game, four songs are only available through AR Mode, one song is DLC and must be purchased from the PlayStation Network, although it is exclusive to the Asian versions of the game. The remaining six songs are included with the PS3 version, but were released as DLC for the Vita version of the game.

The PS Vita version of Hatsune Miku: Project DIVA f took first place on the Japanese sales charts in its debut week, selling 159,592 physical retail copies.[12] The PS3 version released one year later sold 110,229 physical retail copies within its debut week in Japan, also topping the weekly charts.[13] By 20 April 2013, Sega announced that the game shipped a total of 390,000 copies across both platforms.[14]

PlayStation LifeStyle's import review was very favorable, calling the main portion of the rhythm game "as solid as they come" and recommending it to importers.[15] The PS3 version received a review score of 35/40 from Famitsu.[16] 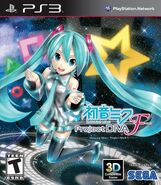