KAITO (カイト, KAITO?) is a character in the Hatsune Miku: Project DIVA series.

KAITO's most notable features is his blue-colored hair and a blue scarf. His default attire consists of a white jacket/blazer with blue edge trimmings, dark brown pants with yellow stripes going down and white shoes with blue soles.

KAITO is a humanoid persona originally voiced for a singing synthesizer application called VOCALOID, created by YAMAHA Corporation. He was published by Crypton Future Media, and developed by YAMAHA for his VOCALOID 1 release. He has performed at live concerts onstage as an animated projection along with Crypton Future Media's other characters (like Hatsune Miku). He is the second Japanese VOCALOID (the first being MEIKO) and the first male Japanese VOCALOID ever to be released. His voice was provided by Naoto Fūga.

As of 31 August 2019, Crypton Future Media will be moving KAITO and their other characters over to their own synthesizer program, Piapro Studio. 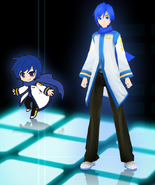 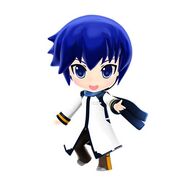