Facial wise, Kagamine Rin is most notable for her short blonde hair, wearing hairclips, and a having white bow attached to her head. She has blue eyes.

Like Hatsune Miku, Kagamine Rin's default attire resembles a school uniform where she wears a white tank top with a yellow bow and short black shorts. Her top also displays a small yellow treble-clef (G-clef). She wears legwarmers designed to mimic speakers. Her boots design uses the YAMAHA EOS as a design base.

Kagamine Rin and Kagamine Len are Japanese humanoid personas of a pair of individual singing synthesizer software developed and distributed by Crypton Future Media and use the VOCALOID2 vocal technologies codenamed CV02 were initially released in December 2007 for the VOCALOID2 engine. They are part of the Character Vocal Series and are both Character Voice VOCALOIDs, both codenamed CV02. There has since been numerous installments such as additional voice banks dubbed "Append" as well an update to the VOCALOID4 engine and an English vocal. They are the second set of vocals for Crypton's VOCALOID Character Vocal Series following Hatsune Miku.

The development of the Kagamines began when Crypton formulated the concept of making a pair of female and male voicebanks. The first idea was for two voices of a girl and her mirror image of the opposite gender, just like twins.

Crypton had the intention to distribute them as twins, but this was not adopted. After seeing many works that depict their relationships differently, Crypton announced in a magazine interview that those would meet their ideal. However, Crypton's final announcement was that they were neither siblings nor lovers. During Append production, Wataru Sasaki (aka. Wat) described them as having one soul between the two of them. Wat also described that the Append boxart makes the pair seem like twins, due to the fetal position they were in.

When the Kagamines were being recorded in 2007, their names had not yet been decided. Their given names of Rin and Len were said to be based on "right" and "left" according to Asami Shimoda. She later confirmed in an interview after the Append release that the names were based on Ken and Rin from Hokuto no Ken, derived from a discussion about names that were familiar from her childhood.

As of 31 August 2019, Crypton Future Media will be moving Rin and their other characters over to their own synthesizer program, Piapro Studio. 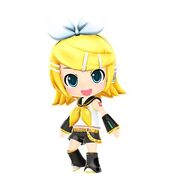