Megurine Luka (ルカ, Megurine Ruka?) is one of the main characters in the Hatsune Miku: Project DIVA series who has appeared in every title to date.

Megurine Luka's notable unique characteristic traits include her long pink hair and her default attire, which stands out from most of the other characters; Luka's attire is not based on a school uniform but is a black dress with incorporated designs of brass and woodwind musical instruments. The blue jewel near her throat represents moisture in the air and water drops.

Megurine Luka is the humanoid persona of a singing synthesizer software developed by Crypton Future Media that uses Yamaha Corporation's Vocaloid 2 vocal technologies. She is part of the "Character Vocal Series" (alongside with Hatsune Miku, Kagamine Rin and Kagamine Len) where she was codenamed "CV03". Her voice was provided by Yū Asakawa (浅川悠, Yū Asakawa?) and is the first voice bank to be bilingual, having both English and Japanese voices recorded for her.

As of 31 August 2019, Crypton Future Media will be moving Luka and their other characters over to their own synthesizer program, Piapro Studio. 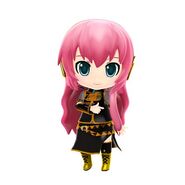